Book Review: With Every Breath 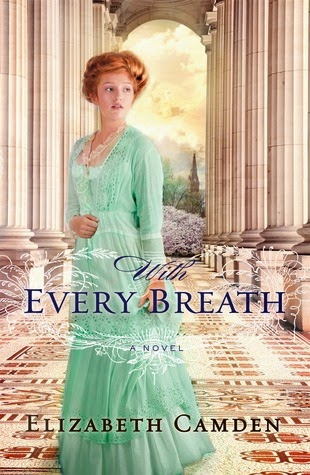 Today I'm sharing my review for With Every Breath, a novel by Christy Award Winner Elizabeth Camden.

First, I have to say I love this title! As you read the book, you realize it's perfect for the plot. It sums up the book in three simple, elegant words.

Kate Livingston is a young widow who helps her parents maintain their boardinghouse by taking a job with her former rival, Trevor McDonough. She and Trevor competed at almost everything in high school, until Trevor won the ultimate victory in securing a coveted scholarship that would have allowed Kate to go to college. Twelve years later, she's surprised when Trevor offers her a job as his assistant.

Dr. Trevor McDonough is passionate to find a cure for Tuberculosis. The work is grueling and heart-breaking, and he needs an assistant who is not afraid to fight alongside him. He's never forgotten Kate Livingston. But when he invites her to work with him, he knows he's taking a chance with his heart.

When Kate begins to unravel Trevor's intriguing past, will she lose her heart in the process? And when an enemy threatens their work with the Tuberculosis patients, will either of them withstand the assault?

This story was a wonderful, intriguing read. It's one of those stories that both entertains and teaches you at the same time. I had very little knowledge of Tuberculosis before I picked up this story, but now I feel as if I have a better understanding. Stories like this that make me feel in awe of the brave men and women who have come before us to fight for cures to make our lives better.

The bonus is that the romance is sweet and heartfelt. Both Kate and Trevor are well-developed characters with a lot of quirks! They're flawed, but loveable, and they have wounded pasts that make them relatable.

Elizabeth Camden always delivers a bit of suspense, and this story didn't disappoint. Wonderful historical novel.
Posted by Gabrielle Meyer at 9:35 AM 1 comment:

Email ThisBlogThis!Share to TwitterShare to FacebookShare to Pinterest
Labels: Book Review, Elizabeth Camden, With Every Breath

This morning, I was in the minivan with my children when they rang the bell in New York City to commemorate the thirteenth anniversary of 9/11.

Thirteen years. I can hardly believe it.

After the bell, there was silence. When the radio went back to its regular program, I turned it down and looked at my ten year old daughter. She had her nose buried in a book. I asked her: "Do you know what happened on September 11, 2001?"

She nodded, her eyes still on the page.

I've only told her the basics: some bad people crashed airplanes into buildings, and innocent people died.

As I spoke, her eyes lifted off the page of her book and she stared at me. I had her complete attention, just as New York City, Washington, D.C., and a little field in Pennsylvania had our attentions that day.

I was married on June 8, 2001, just three months before the attack. My mom had just had a spinal fusion five days before, and was in a halo. I had come home from Ames, Iowa, where my husband and I had just moved for him to attend Iowa State University, so I could help my mom.

On the morning of September 11th, after an emotionally difficult weekend at the hospital with my mom, I was sleeping on their couch when the phone rang. It was my aunt, telling us: "Turn on the news! Something is going down."

My mom came from her bedroom, and my younger sister from her bedroom, just as I flipped the television on in the living room. At that point, both of the towers were already smoking, and the newscasters were frantically trying to keep up with what was happening. 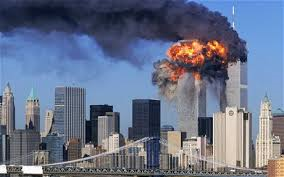 I remember being very confused and frightened. My husband was five hours away, and all I could think was: "Last time America was attacked like this, we entered WWII." Was WWIII about to start? Would I see my husband? What did all of this mean?

Before our very eyes, the first tower collapsed and we sat in stunned silence. All I remember about that day was sitting in front of the television, feeling numb. I remember the newscaster saying: "After today, our lives will never be the same."

That afternoon, I finally left the house to get the mail. I remember the sky being a brilliant blue, with not a single cloud to be seen. As I looked around me at the beautiful Minnesota fields and swaying grasses, I couldn't comprehend what thousands of other people were feeling at that moment. The suffering, in mind, body, and spirit, was staggering. Lives were being irrevocably changed. Thousands were lost. 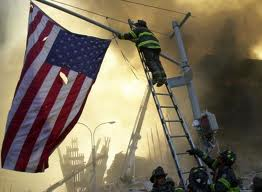 I told my daughter about the brave men and women who took over the terrorists on the flight headed for the White House. How they all made calls home to their families to say goodbye, and then crashed the plane in a field in Pennsylvania, sacrificing their lives to save countless others.

I didn't know I was going to cry, but my heart broke all over again, and I couldn't stop the tears.

My daughter continued to stare at me, and I thought: "She may read about 9/11 in a textbook, but there is no greater understanding than to hear someone talk about their own personal experience." I may not have been at Ground Zero in person, but I was there in spirit. I may not have witnessed the atrocities in person, but I saw more than I could handle on the television. I didn't lose a loved one that day, but I mourned with all those that did.

I was an average American that day, and I was profoundly changed.

As the days and weeks after 9/11 progressed, we learned all the chilling details. We watched the funerals, heard the heroism of those who sacrificed to save others, and we asked ourselves: "Is this the wakeup call that will get our country back on track?" 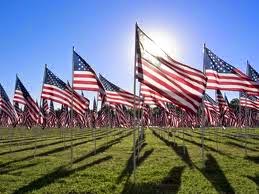 For the first few months, that's what it felt like...but then slowly, we returned to our daily lives and 9/11 began to fade.

My prayer is that 9/11 will never fade completely. That we'll remember how our country came together to mourn the great devastation, and become fully united.

I pray we remember what we learned thirteen years ago: our enemy is not each other. Our enemy is the outside forces who want to destroy one of the greatest nations on Earth. Our America. The land of the free, and the home of the brave.

As I finished, my daughter's gaze drifted outside the minivan's window and I could see her thinking about a day before she was even born. I knew she was thinking about the people who sacrificed, and how America suffered. I could see the sadness in her eyes.

After a few moments, she turned back to her book, and started reading again.

But for just a moment, my daughter understood why 9/11 is so important.
Posted by Gabrielle Meyer at 1:33 PM 4 comments:

Email ThisBlogThis!Share to TwitterShare to FacebookShare to Pinterest
Labels: 9/11 May I just stop and sigh? As soon as the book covers appeared above, that's exactly what I did! Wrapped up in these three breathtaking images are journeys, relationships, and wonderful memories that have become a part of who I am, truly. I feel like I should be recognized as an honorary member of the Ballantyne family.

Over the past three years, as each book released in Laura Frantz's series, I devoured them like I would a decadent treat. I ached with the Ballantynes, I celebrated with them, and I fell in love over and over again, until their story became mine.

That's how much I love The Ballantyne Legacy and its author, my dear friend, Laura Frantz.

I'm thrilled to be sharing the third and final review for this series. You can find my reviews for Love's Reckoning here and Love's Awakening here.

But today is all about Wren and her Jamie, in Love's Fortune. 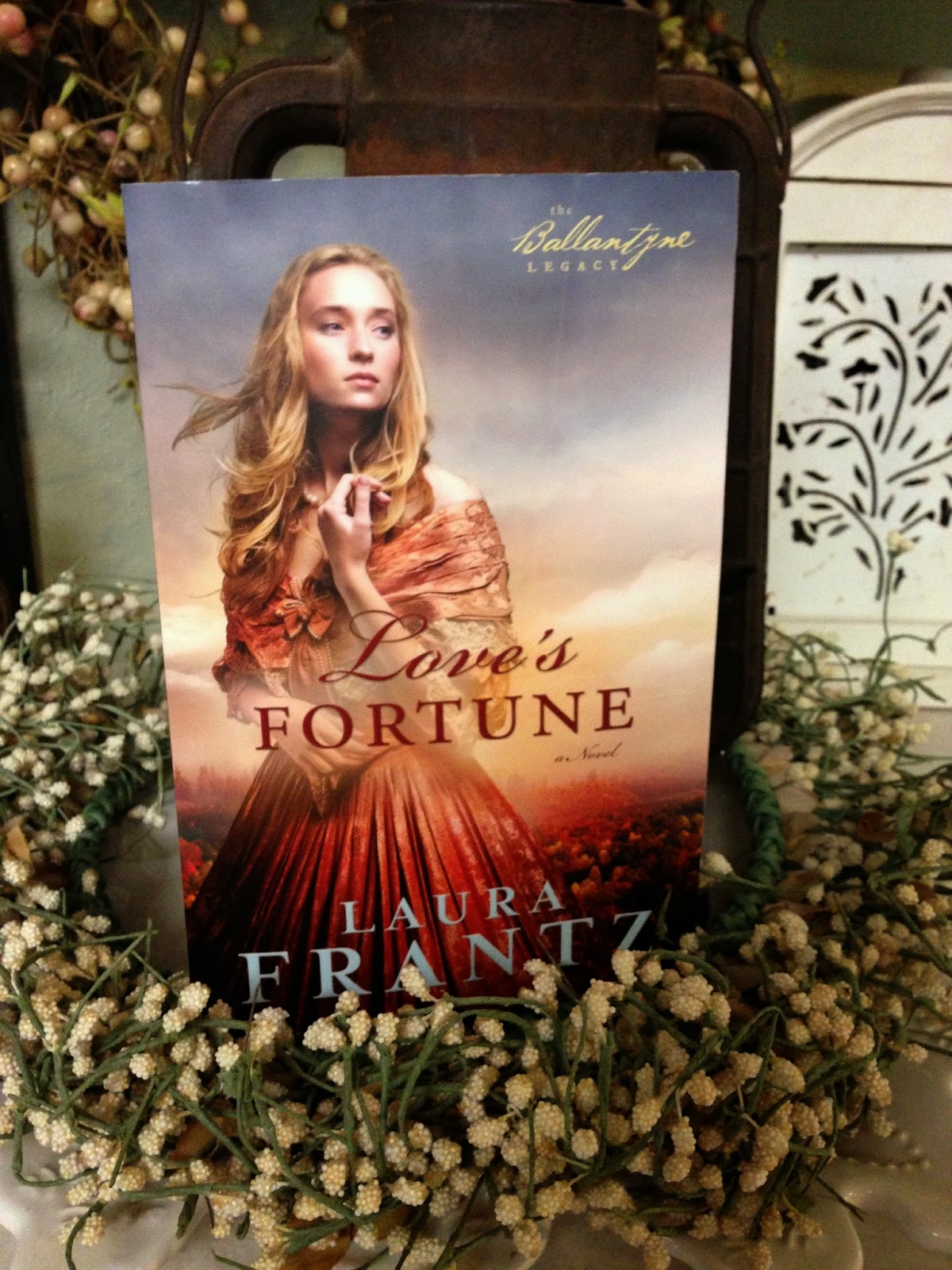 Love's Fortune is the story of Wren Ballantyne, the granddaughter of Silas and Eden from Love's Reckoning, and the niece of Ellie and Jack in Love's Awakening.

Wren grew up in the peaceful Kentucky woods, far away from the prestige and responsibilities of her Pittsburgh family. When her father is called back to Pittsburgh to help with Ballantyne business, Wren is thrust into a society she abhors, and finds herself a pawn in her aunt and cousin's scheme to marry her off well.

James Sackett is one of the Ballantyne's most trusted steamboat pilots, and a close friend of the family. When he is asked to act as an escort for Wren's debut into society, he is reluctant, but agrees. He finds Wren to be enchanting, but out of his reach. Embroiled in the Underground Railroad, his life in danger, James is in no position to take a wife--and even if he was, he has nothing to offer Wren Ballantyne.

As the Season progresses, and Wren wins a place as the most sought-after debutante in Pittsburgh, will she follow the plans carefully laid out for her--or will she embrace her heart's desire?

Love's Fortune is set in Pittsburgh in the early 1850s, when political turmoil, rapid industrial growth, and distinct societal roles add suspense and drama at every turn. The historical details in Love's Fortune are impeccable, and both educating and entertaining all at once. Laura artfully weaves three generations into one sweeping series, and includes secondary characters seamlessly throughout all the books.

As always, Laura's beautiful prose and lovely descriptions paint a captivating picture. The colors, smells, tastes, and textures are almost tangible. She adds enough detail to set you firmly in her storyworld, but leaves room to allow your own imagination to roam across the Pennsylvania and Kentucky landscapes.

From the steamboat, bringing Wren up the river to Pittsburgh, to the castle-like mansion being built by a neighbor, this beautiful story dances to life, and offers a fitting end to an exquisite series of books.

Your Turn: Have you read any of Laura's books? The Ballantyne Legacy spans many decades in American history. Which is your favorite decade, and why?

Be sure to check out Laura's Pinterest board for Love's Fortune here.
Posted by Gabrielle Meyer at 10:22 PM 4 comments: