The Lady and the Lionheart, by Joanne Bischof 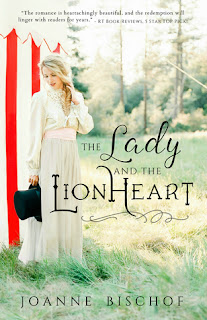 I've finally dried my tears enough to type legibly. The Lady and the Lionheart moved me so deeply, I'm not sure I can do this review justice. There are some books that are entertaining, and some that are life-changing. This book is both. From the very first scene, where Ella Beckley sees the circus streamers blowing down the street, to the final scene where Holland Lionheart is looking back on the past fifteen years of her parents' life, I was enthralled to keep reading.

Charlie Lionheart is the hero of all heroes. One scene in particular had me so emotionally enraptured by him, I dare say I fell in love with a fictional character. He is both tender and brave-hearted, perfect and flawed, humble and proud. He is so prominent on the page, one would think the heroine would pale in comparison, but not in this story. Ella Beckley is a beautifully woven heroine, with threads of fear, courage, weakness, strength, despair and hope. She is lovely, both inside and out, and is so real, it's almost as if she reaches out and grasps your hand to come along on her journey.

I was encouraged to read this story by a friend who said she wept at the end. Truth be told, I felt deeply for these characters, and I had come to the end, and wasn't sure why my friend had cried. But then, in the final scene, Holland shares a musing that struck me so swiftly, and so profoundly, I began to weep. For what Christ has done for me, and what He has called me to do for others. I believe the story will resonate with every reader on a different level, and the message will affect some more than others, but for me, the message had me on my knees with a deeper understanding of unconditional love and sacrifice. Truly, a must-read.


About the book:
Two worlds collide when the circus comes to Victorian-era Virginia.

Raised amid the fame and mystique of the Big Top, Charlie Lionheart holds the audience in the palm of his hand. But while his act captivates thousands, it’s away from the spotlight where his true heart lies. Here he humbly cares for his pride of lions as if they were his brothers, a skill of bravery and strength that has prepared him for his most challenging feat yet—freeing an orphaned infant from the dark bondage of a sideshow. A trade so costly, it requires his life in exchange for hers, leaving him tarnished by the price of that choice.

As the circus tents are raised on the outskirts of Roanoke, nurse Ella Beckley arrives to tend to this Gypsy girl. All under the watchful eye of a guardian who not only bears a striking resemblance to the child, but who protects the baby with a love that wraps around Ella’s own tragic past, awakening a hope that goodness may yet reign. When their forbidden friendship deepens, Charlie dares to ask for her heart, bringing her behind the curtain of his secret world to reveal the sacrifice that gave hope to one little girl—boldly showing Ella that while her tattered faith is deeply scarred, the only marks that need be permanent are his own.

You can purchase the book here. 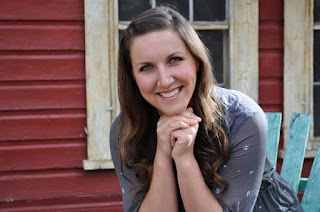 A Carol Award and three-time Christy Award-finalist, Joanne Bischof writes deeply layered fiction that tugs at the reader's heartstrings. She lives in the mountains of Southern California with her husband and their three children.