When Frozen arrived in the theater, my girls went crazy for Olaf, Elsa, and Anna. We went to the theater twice to see the movie, which is something I don't believe I've ever done for another film.
My girls watched Frozen clips on YouTube and memorized almost the entire soundtrack (much to my husband's chagrin). Our three year old twin boys were even singing Let it Go and Do You Want to Build a Snowman.
About a week before the DVD released, some of our neighbor girls were over and they were all talking about the movie. In a spur of the moment decision, I told the girls to plan on coming to our house the Friday after the DVD released for a Frozen Party. I was met with a round of cheers!
I'm a busy mom (aren't we all?), so I wanted to do something fun, yet stress-free. Here are just a few ideas to get your own mind turning for your Frozen Party. 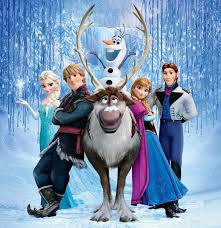 Before the girls arrived, I draped some blue tulle in the dining room. Nothing fancy (or expensive), but enough to set the mood. 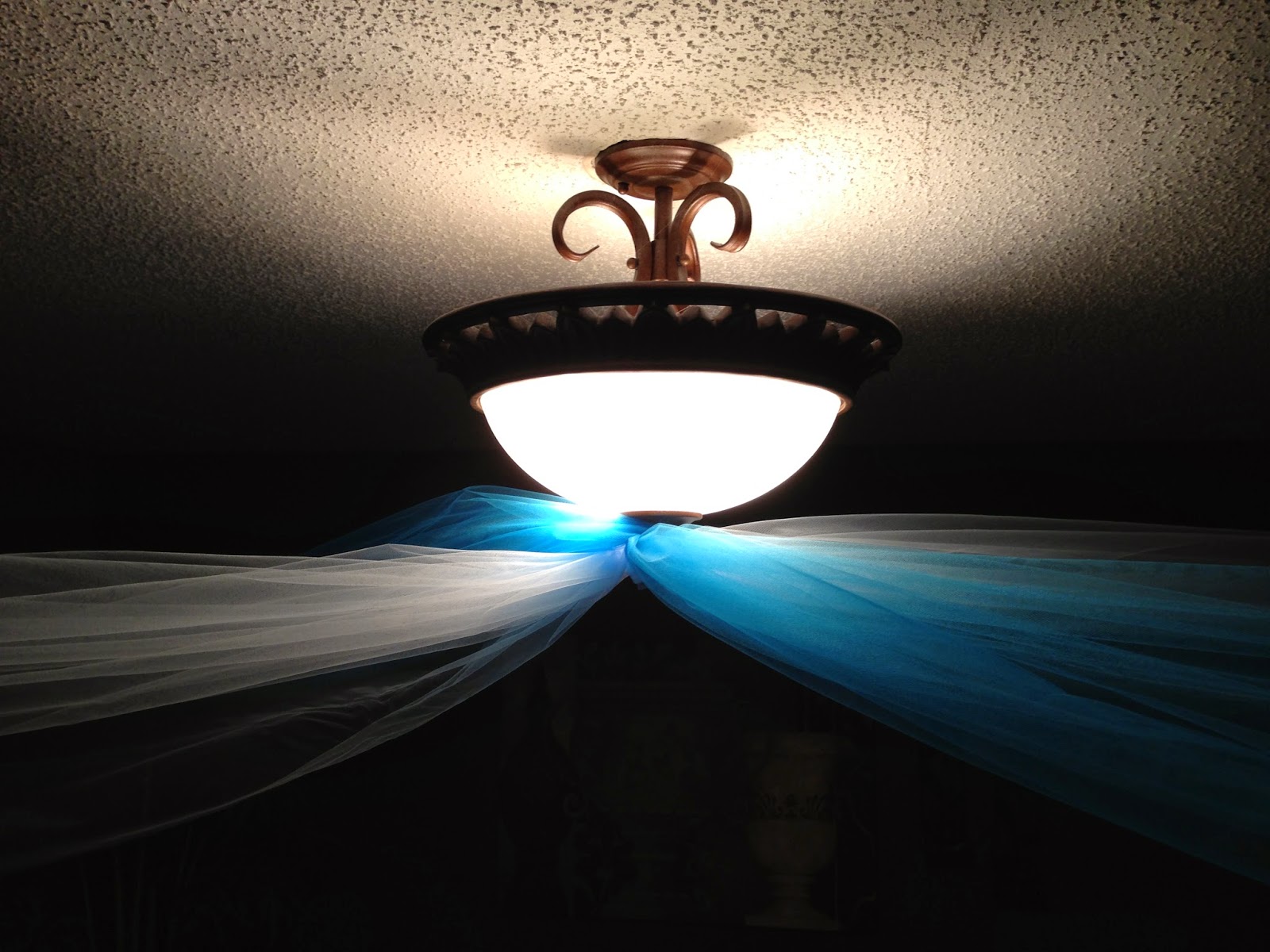 As the girls arrived and put their slumber party gear in the family room, I offered to do Elsa and Anna hairstyles, depending on their hair length and preference. I forgot to snap some pictures, but you can see some of their hair styles in the photo below. One chose not to have her hair done, and that was fine too. 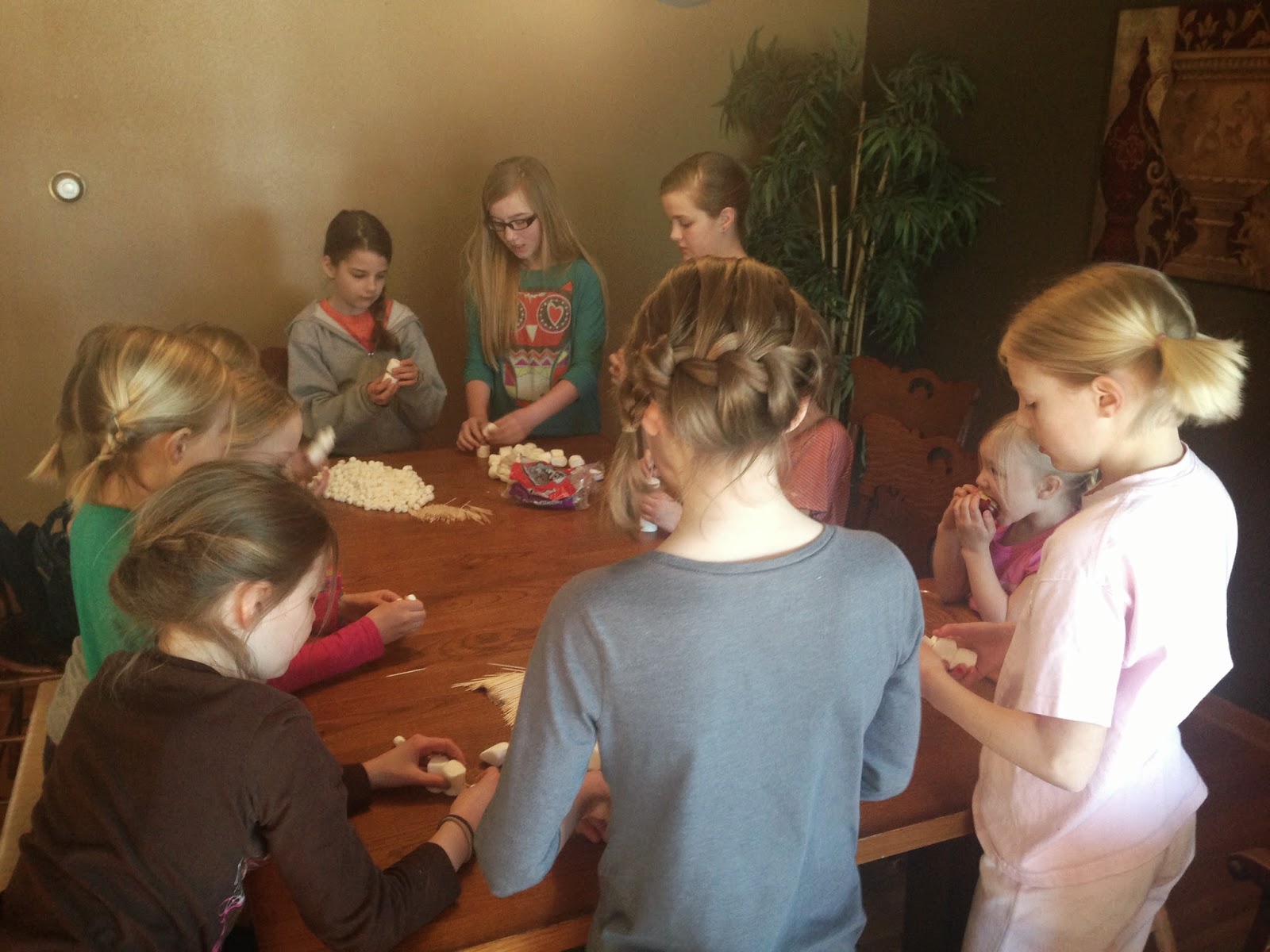 ﻿
﻿
After everyone's hair was styled, it was time for supper. I decided to serve "frozen" (a.k.a. "easy") food for the party. Frozen pizza (baked, of course),  frozen Orange Julius (recipe at the bottom), and frozen yogurt. I also threw in some fresh fruit so I didn't feel completely terrible about the junk food. 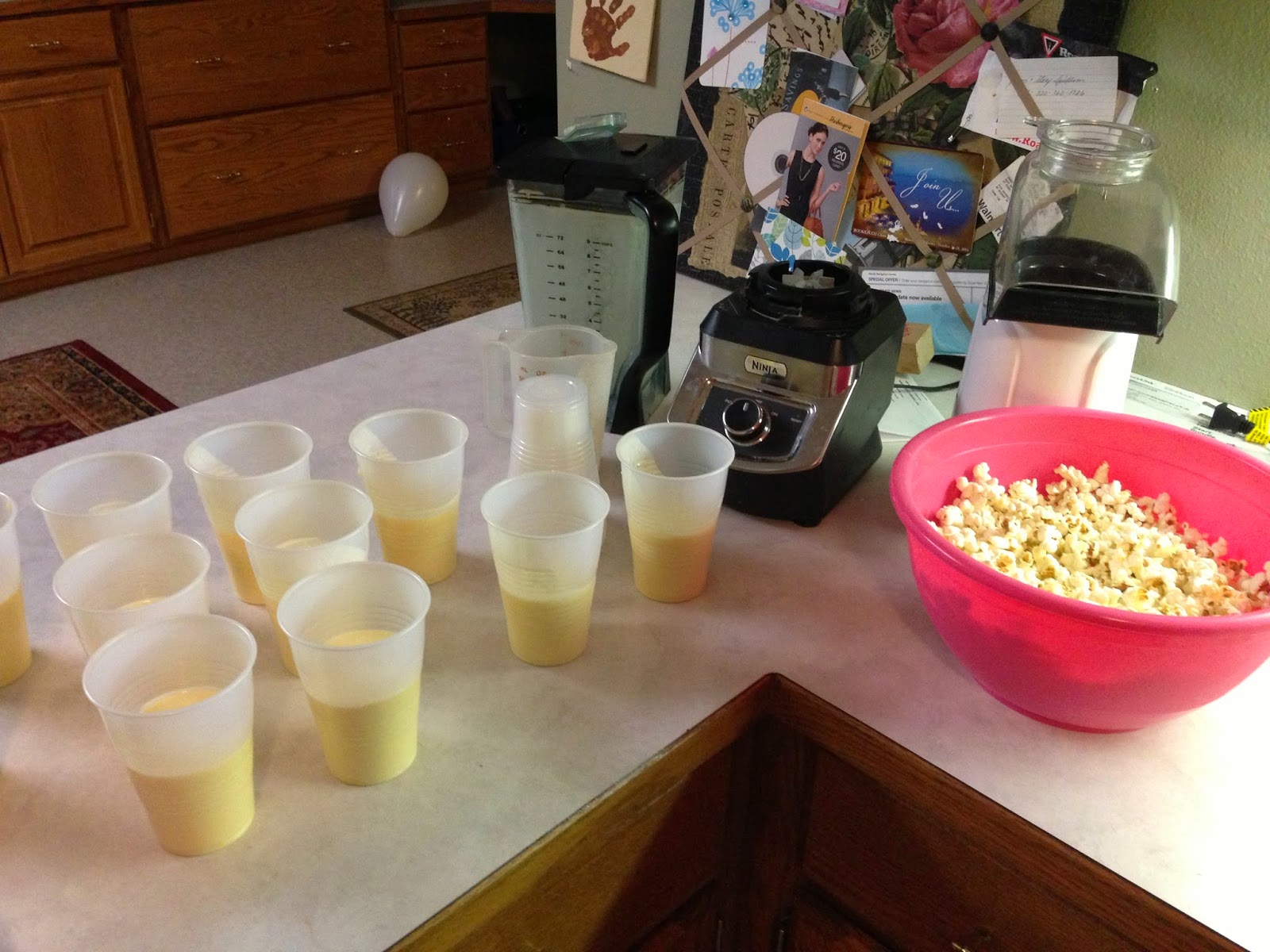 The Orange Julius didn't come until later, when it was time to watch the movie. I also served popcorn--because the girls informed me you can't watch a movie without popcorn.


After the pizza, we played some games. Remember, this is all super easy. I was the only adult at the party (my hubby took our boys to Grandma's house). All of this was fun and simple to prep.

First, I divided the girls into two teams and then gave them two bags of marshmallows and toothpicks to build their own Frozen castles! Some were even making little Olaf snowmen for their castles. 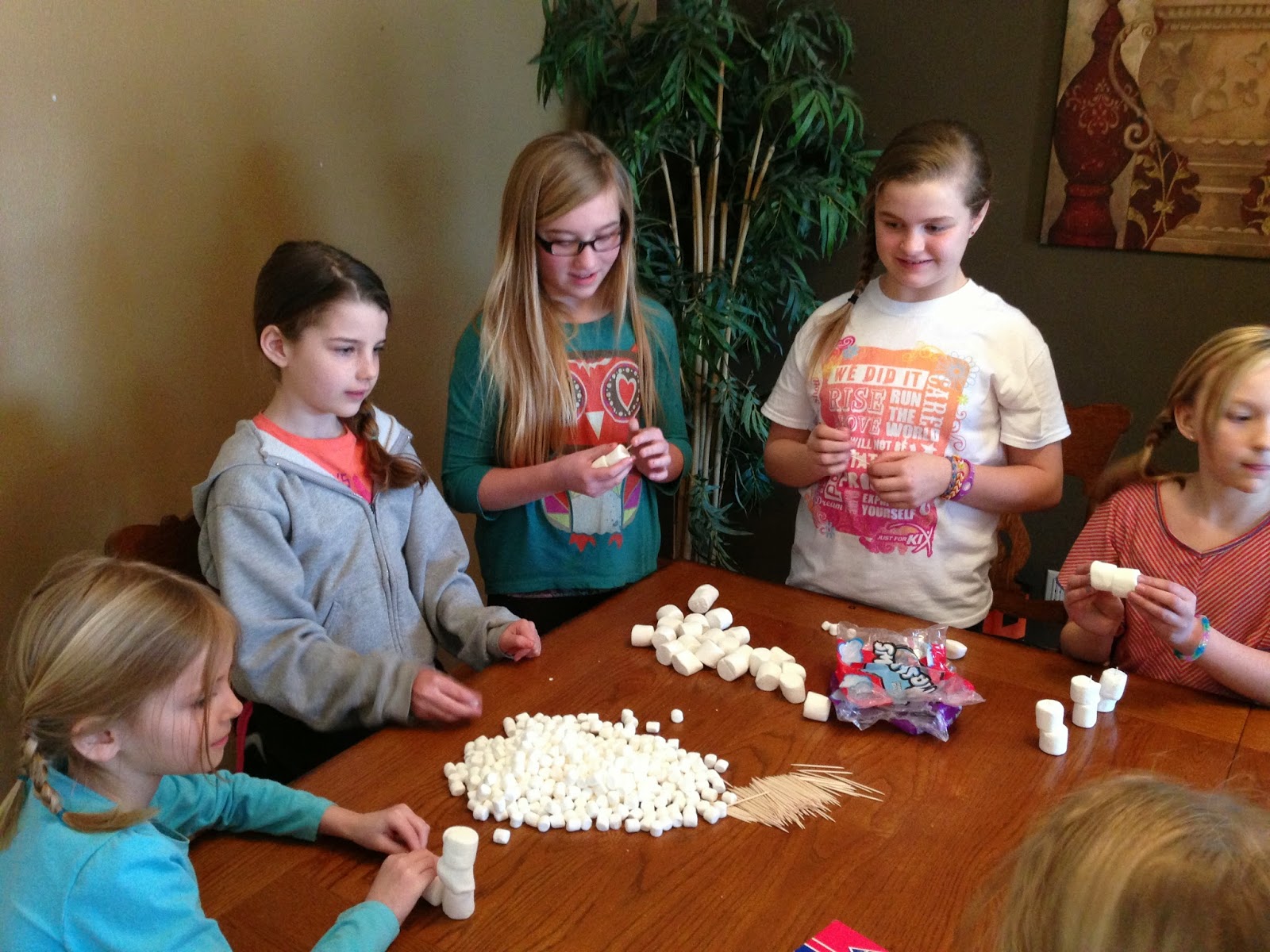 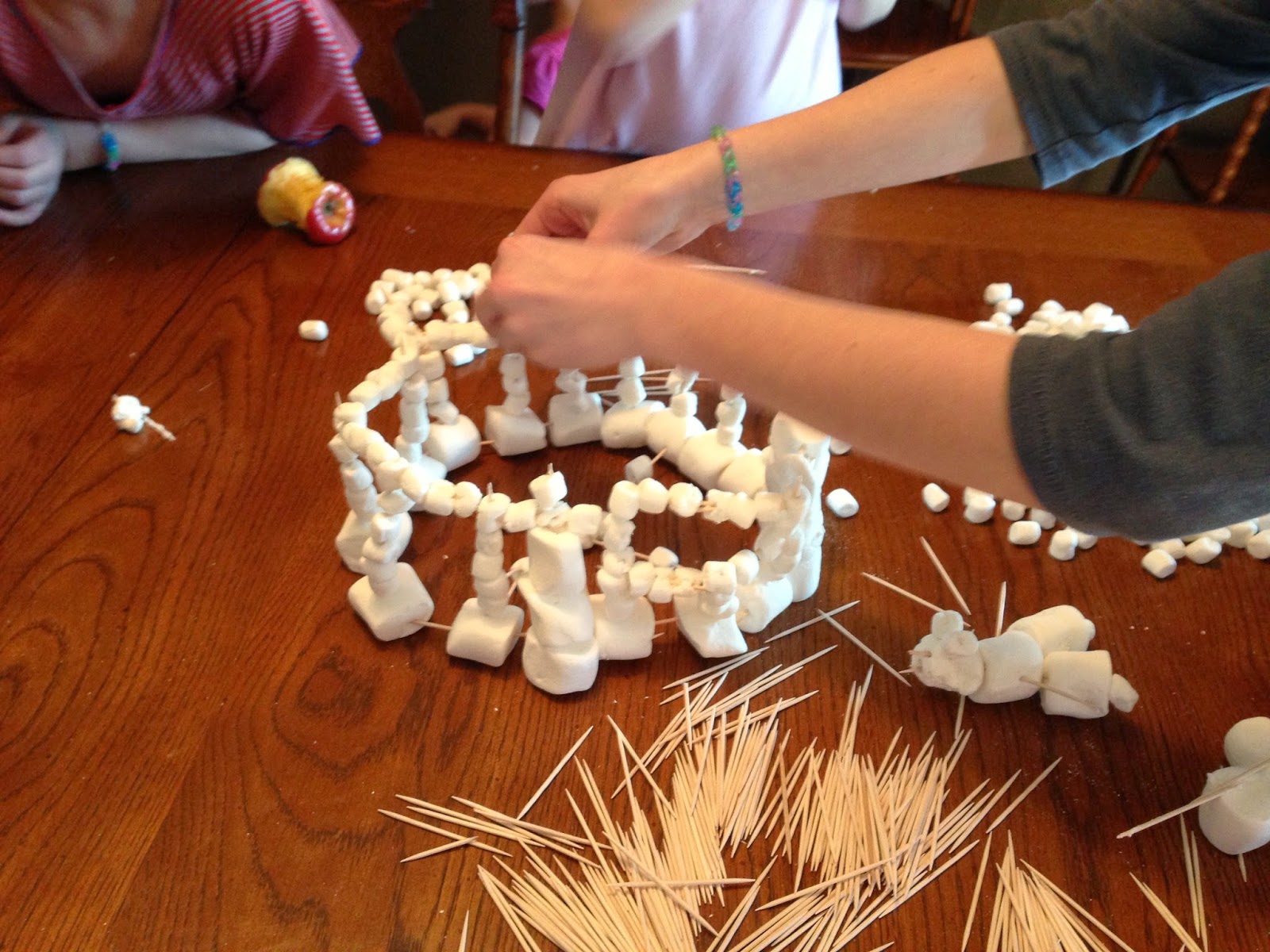 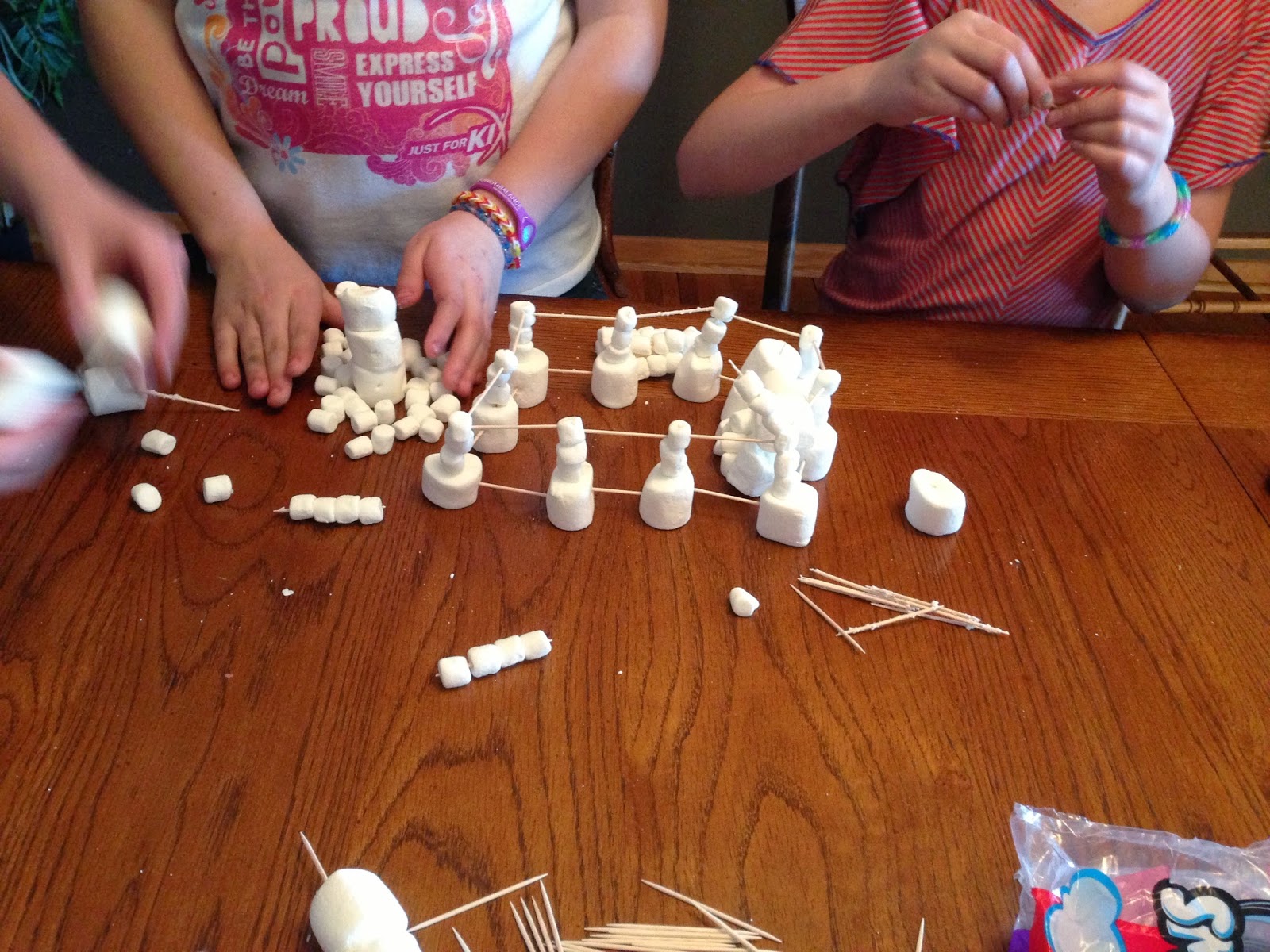 After the castles were built, we played a guessing game. I taped a character on each of their backs and they had to figure out who they were by asking the other girls yes and no questions. This got loud and there were many giggles. Here's a link to the Frozen characters. 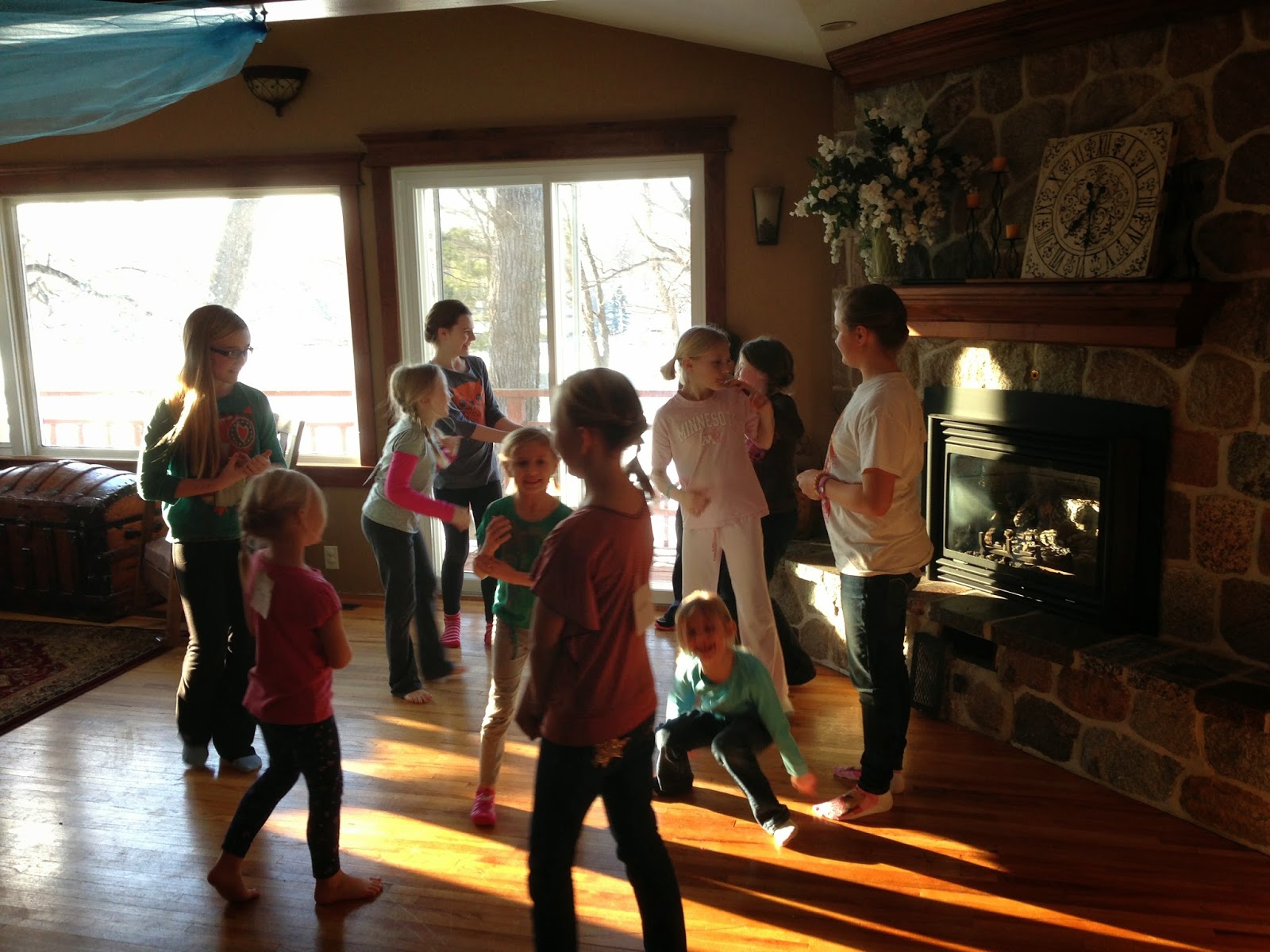 Next, they each got a white balloon and they blew it up, then they could make their own Olaf snowman with a Magic Marker. :) It was fun to see what they came up with. 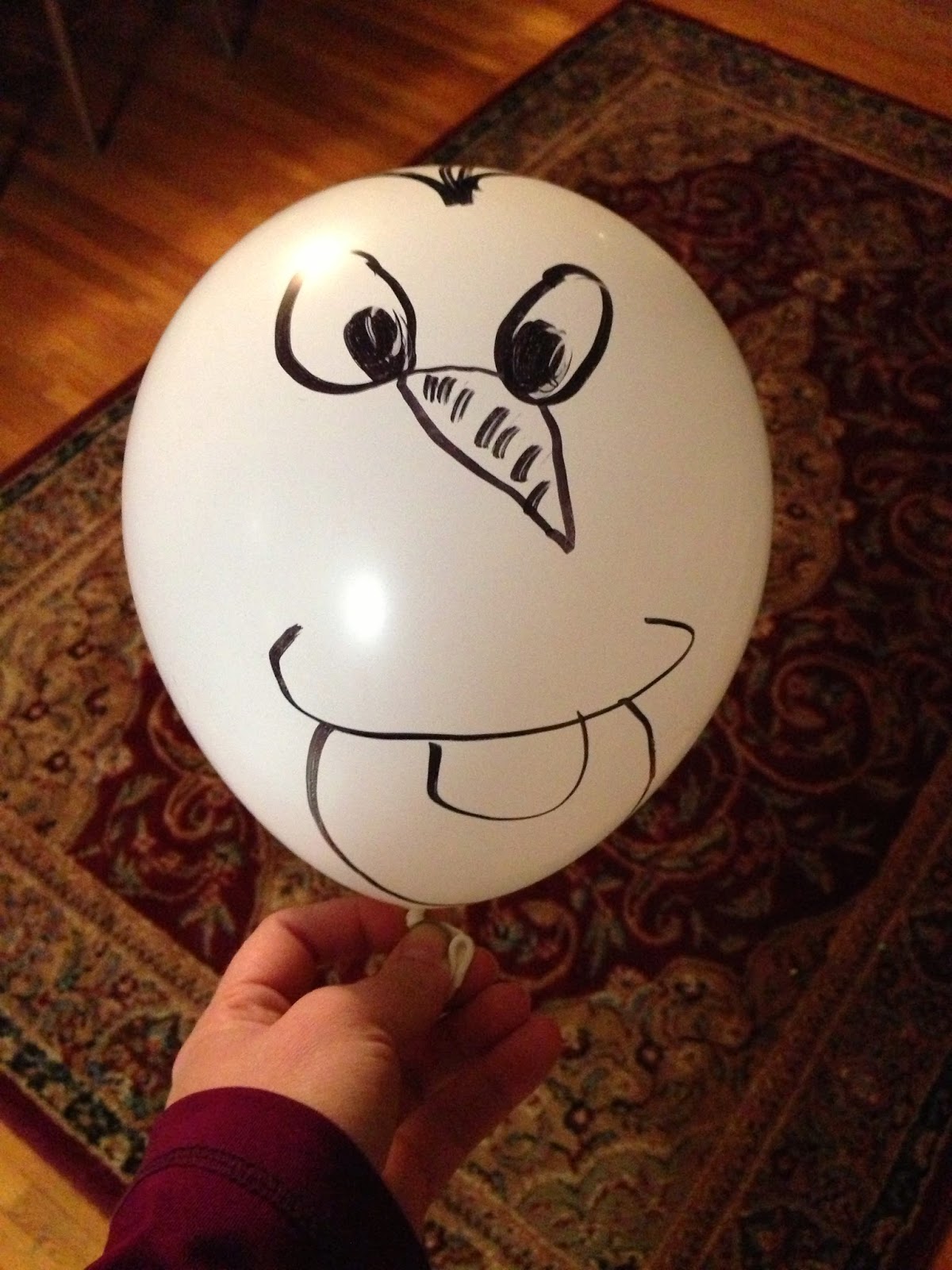 None of the activities were competitive, but I did buy some Frozen toys from Wal Mart for a $1 a piece. We had eleven girls, so I bought twelve, just in case. We played the dice game to win the prizes. The girls sat in a circle and I put all the prizes in the middle. Then two plates were sent around the circle with two dice on each plate. When a girl rolled doubles, she picked a prize from the center. After all the prizes were collected (each girl had one), I played In Summer, which lasted for two minutes. If the girls wanted, they could roll again, and if they got doubles, they could swap their prize for someone else's prize. You could keep going until the song stopped. This was fun and caused even more giggles.
﻿﻿﻿After the food, games, and prizes, it was time for the main event! The girls cuddled up in their pajamas and blankets and took over my family room to watch their favorite movie, Frozen. 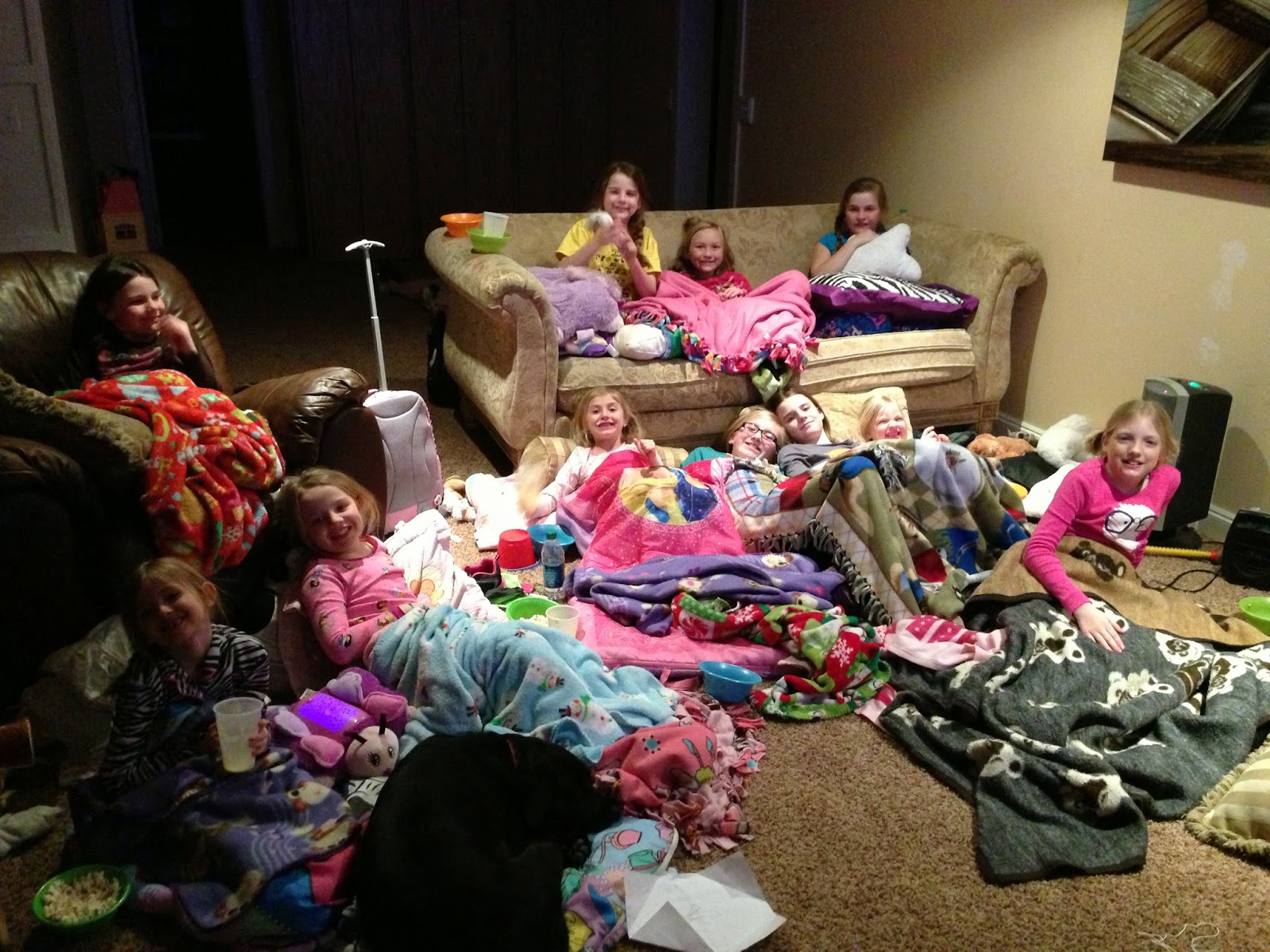 I had a good time and I enjoyed watching my daughters laugh with their friends. We could have done a Frozen trivia, but some of the girls hadn't seen the film yet, and I didn't want them to feel left out.
This was a simple, fun, and inexpensive party, but I know they'll always remember it.
Your Turn: What are some fun ideas you have for a Frozen Party?

Directions:
Combine all ingredients, except ice cubes, in blender.
Blend 1-2 minutes, adding ice cubes one at a time, until smooth.
Posted by Gabrielle Meyer at 10:27 PM 7 comments: 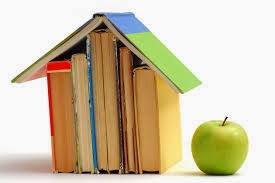 I started this blog two years ago and I was faithful to post three times a week, without fail, for over a year and a half. Until this last fall.

As I sat down and contemplated why my blog has fallen to the bottom of my priority list, I've realized it was pushed there because I added one more thing to my already busy schedule: homeschooling.

We have two daughters (ages 9 and 7) and twin boys who will be 4 at the end of this month. I was homeschooled when I was younger, and it was always my dream to homeschool our children. After the boys were born (when our oldest was in Kindergarten), I realized I wouldn't be able to homeschool at that time. We put our oldest in a private school, followed by our second daughter last year.

I still wanted to homeschool, and I found a great curriculum that started in 3rd grade, so we decided to keep our children in their private school until they enter 3rd grade, and then we'd start homeschooling. This year our oldest entered 3rd grade.

This has worked well for our family--but it's required me to sacrifice in other areas, including this blog.

I will keep blogging when I can, but it's not at the top of my priority list for this season in my life. I am writing a new novel set in 1927, and when I'm not homeschooling, I am researching or writing. Thankfully my hubby's work is seasonal, so he's home during the winter and that allows me to still write.

I hope to have my first draft of my new story finished by the beginning of April. I'll work on edits and revisions for the month of April and hopefully send it off to my agent by the beginning of May. At that time (if this winter ever ends), my hubby will be going back to work, my daughter will be finishing up her first year of homeschool, and I will take the summer off from writing. I'm hoping to rekindle my blog at that time and get back to my blogging schedule.

Thank you for being a faithful reader! As my schedule allows, I'll be back with fun posts. I have some friends who are releasing books this spring and I hope to host them here and offer some great giveaways. I'll also post periodically about my story's progress. (I am having so much fun writing this book!)

Enjoy these fleeting days of winter! :)

Your turn: Is this a busy season of life for you? What have you had to give up to follow a dream?
Posted by Gabrielle Meyer at 10:39 PM 4 comments: