Don't you just love authors that keep getting better, despite the fact that the last book you read by them was so good, you wonder how they could possibly write a better story after that? 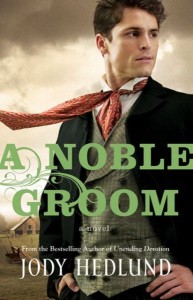 Such is the case with A Noble Groom, by Jody Hedlund. I loved Annalisa and Carl's story.

Annalisa is a young widow living in a German immigrant community in Michigan in the 1880s. Though she had a loveless marriage with her husband, losing him puts her in a dangerous position. Alone, with a young daughter and a child on the way, Annalisa is left to manage a struggling farm and protect it from a corrupt land developer, who will stop at nothing to take what he wants.

As a widow, she is at her father's mercy, and must marry a man her father chooses. Annalisa will do whatever it takes to provide a better life for her children, and so she concedes to wait for a distant cousin, Dirk, to come from Germany to be her husband.

Carl von Reichart, a German nobleman by birth and a chemist by choice, faces the guillotine for a murder he did not commit. In the wee hours of the morning, his faithful servant breaks him out of prison and instructs him to go to the United States, to an immigrant town in Michigan, where he can hide with the servant's family until his name is cleared.

Carl arrives in Michigan and only plans to stay as long as necessary with the peasants who work the land and slave for their meager existence. What he doesn't plan is falling in love with Annalisa, and her charming little girl, and discovering the depth of character in a community of immigrants who only desire a better way of life.

When Carl and Annalisa fall in love, more than their social status will keep them apart. Annalisa's cousin Dirk is on the way, and he fully expects a bride to be waiting...

What I loved most about this story was the love between Carl and Annalisa--two characters I could believe were real people. As the tale unfolds, their love story flows beautifully and naturally, filling us with all the hope and possibilities of happiness. We ache to see them overcome the obstacles to achieve a happily-ever-after.

I didn't think it possible, but this book is even better than the last one by Jody. With her track record, I can't wait to see what's coming next!
Posted by Gabrielle Meyer at 9:00 PM