May is the release month for The Backcountry Brides Novella Collection from Barbour Publishers and we're celebrating! All month long, the authors from the collection will be hosting one another on their blogs to share about different aspects of their stories. 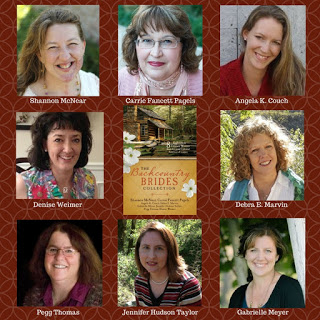 My blog will be devoted to the Secondary Characters from each novella and to celebrate this fun topic, my second guest is Debra E. Marvin, author of A Heart So Tender.

Be sure to enter the Rafflecopter Below for a chance to win a fabulous grand prize! 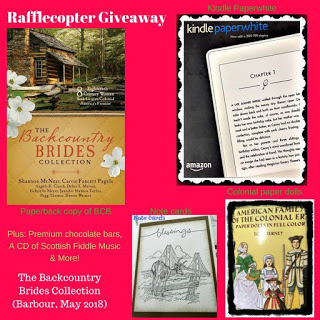 Before we get to Debra's post, here's a little more about the collection:

Travel into Colonial America where nine women seek love, but they each know a future husband requires the necessary skills to survive in the backcountry. Living in areas exposed to nature’s ferocity, prone to Indian attack, and cut off from regular supplies, can hearts overcome the dangers to find lasting love? 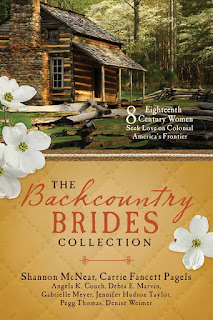 A Heart So Tender, by Debra E. Marvin - Secondary Characters

It’s hard to ignore a secondary character when he’s a bigger-than-life, and ‘real-life’ person. In A Heart So Tender, we meet Sir William Johnson, an important man in Colonial History. He was born in 1815 in County Meath, Ireland, and came as a young man to work for his uncle in what is now New York State. It’s said that his familiarity with mistrust and subjugation—as an Irishman living under English rule—gave him an unusual empathy for all he met. While he was not a religious man, he encouraged all religions to build houses of worship and join in multi-cultural settlements.

Johnson set up a trading post and learned the Mohawk language, and by 1744 was appointed Superintendent of Indian affairs for The Crown. He acquired much land and wealth but it was his ability to enlist Haudenosaunee (Iroquois) warriors against the French that helped him land military honors and government favors. He became known as a military hero during the French and Indian War (The Seven Years War), and negotiated the Treaty of Fort Stanwix and others. After the battle of Montreal, Johnson was given a “title” to 100,000 acres of land in the Mohawk Valley.

Johnson married (though not in a legal, or church-sanctioned ceremony) Molly Brant, sister of the Mohawk leader Joseph Brant and had children with her. She was not his first wife, but he remained on good terms with his English wife and children even as his new Mohawk family expanded. Later, he was able to find positions of authority and good marriages for most of his offspring.

Being well-respected among the native people made him an important asset to the British Government. After continued trouble along the frontier, Pontiac’s Rebellion to the west, and an incident called The Massacre at Devil’s Hole, Johnson invited chiefs and warriors from every tribe to come to a great gathering of nations at Fort Niagara in the summer of 1764. Many treaties were signed and he managed to win land along the Niagara River from the Seneca who’d been behind the massacre.

Unfortunately, subsequent military leaders had much less empathy for the native people and, because of the Haudenosaunee’s history of friendship with the British, they were burned out of their villages across the region, and sent away during the War of Independence.

The movie The Broken Chain tells the story of Mohawk Leader (and William Johnson’s brother-in-law, Joseph Brant). Actor Pierce Brosnan plays the role of Sir William Johnson, a fascinating character! I enjoy placing “real-life” historical people in my stories, and I hope you enjoy all of the novellas in The Backcountry Brides collection. Debra E. Marvin tries not to run too far from real life but the imagination born out of being an only child has a powerful draw. Besides, the voices in her head tend to agree with all the sensible things she says. She'd like to live a wee bit closer to her grandchildren, but is thankful that God is in control, that He chooses to bless us despite ourselves and that He has a sense of humor.

Other than writing light-hearted romances and gritty gothics, she has rather normal obsessions such as fabric, peanut butter, vacations, British dramas, and whatever mystery series she's currently stuck on.

Your Turn: What movies do you enjoy that are based on real events or people? Some that come to mind for me are Apollo 13, Lincoln, Saving Mr. Banks, Amistad, and Amazing Grace, just to name a few. 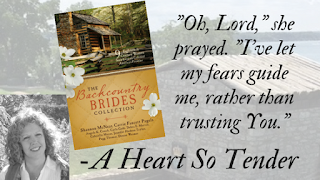 a Rafflecopter giveaway
Posted by Gabrielle Meyer at 8:54 AM