In 1885 a New York reporter visited St. Paul and declared the city to be another Siberia. He said it was "unfit for human habitation."

Offended by the attack, the people of St. Paul decided to retaliate by showing the world how much fun winter in Minnesota can be.

In 1886 the Minnesota Winter Carnival was born. It was held in the month of January. 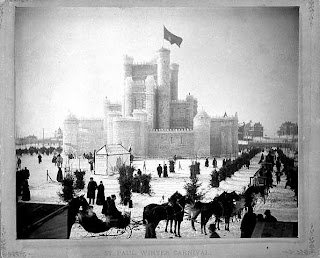 One of the highlights of the first Winter Carnival was this ice castle. It was built with over 35,000 blocks of ice taken from Minnesota lakes.

The ice castle has been the centerpiece of a festival that has continued to grow for many years. The festival has included bobsledding, ice horse racing (on frozen lakes), a royal crowning, dogsled races, snow and ice sculpting contests, a parade and much more.

What about you? Have you been to a Winter Carnival? Would you like to go?
Posted by Gabrielle Meyer at 12:42 AM