One of my favorite Minnesota posts was a set of trivia questions I posted here. This state of mine is a wonderful place to live--but with all the cold and snow, I know a lot of people sometimes wonder why we do. To be honest, in the coldest times of the winter, I often ask myself the same question. :) But then Spring, Summer, and Fall come around and I have no question in my mind. Minnesota has some of the prettiest landscape, the most diverse seasons, and the nicest people. 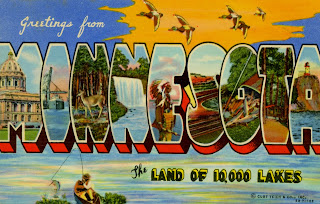 On this (warmer) Minnesota Monday, I thought it would be fun to have another trivia contest! Share your answers below (no googling!) and I'll give the correct answers next Monday.

The name "Minnesota" is a Dakota name, but what does it mean?
a. "Land of Sky Blue Waters"
b. "Big Water Country"
c. "Many Waters"
d. "Clear Water"

The Minneapolis/St. Paul Metro Area is called the Twin Cities and is densely populated. What percentage of the population of Minnesotans lives in the Twin Cities?
a. 30%
b. 40%
c. 50%
d. 60%

So, what do you think? I'll share the correct answers next Monday.
Posted by Gabrielle Meyer at 10:39 PM