﻿
﻿﻿For as long as I live I will always remember the day we heard the word "twins" for the first time.  It's amazing how one little word can completely change your life forever.  Even after the sleepless nights, the endless diapers and the continuous crying, I thank God that the word that changed our lives was a word packed with blessings and wonder - when everyday so many people hear words that are devastating.  It never ceases to amaze me that perspective makes all the difference in the world.  Even when you have two infants who play tag team throughout an endless night, and after counting to 16, you lose track of the number of times you've crawled out of your bed, you can still count your blessings.

Our first two children were adorable, healthy little girls born 23 months apart.  But after delivering our second daughter, I had some complications that lead to an emergency surgery and a blood transfusion.  I wasn't all too excited to get back into the baby making game for quite a while after that experience!  It wasn't until our second daughter was about three that we decided if we were going to have more children, the time had come.  We were out of the diaper stage at that point and I knew if we didn't get back into it soon, we wouldn't want to go back at all. 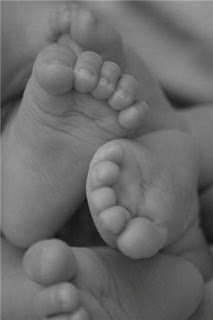 In August 2009 I found out we were expecting again!  We were so excited.  It had taken us about a year to conceive our first daughter, and about 3 months to conceive our second, so it took us by surprise when we got pregnant the first month we tried with our third pregnancy.

Two things stood out to me about this third pregnancy.  One, I had morning sickness - which I was fortunate enough to by-pass the first two times.  And, two, I began to show before I reached my second month of pregnancy.

When I was 9 weeks along we took the girls with us to our doctor appointment.  I knew we would have an ultrasound and I thought it would be great for them to see the baby.  At this point I had started to suspect that there was something a little different about this pregnanacy.  Other than the morning sickness and the early showing, I had no other signs, but, nonetheless, I had a feeling.  I even told Dave the night before our ultrasound: "I think we're having twins."  But he just smiled and said there was no way. 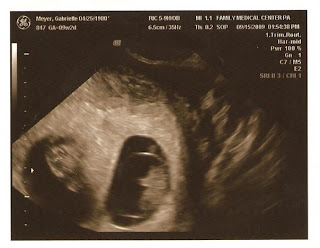 I think every person who is pregnant asks themselves, what if I am pregnant with twins?  And when you look at the ultrasound you might be just a little (teeny) bit disappointed that there aren't two there.  So when the nurse turned off the lights and the ultrasound image popped onto the screen and I immediately saw two little blobs come into focus, my heart started to beat like crazy!  The image that flashed on the screen is seared into my memory.  At precisely the time I noticed, the doctor said: "Bonus!... You're having twins!"  I still amazes me to think about that moment.

I remember looking at Dave in complete astonishment (because even though I had a feeling we were having twins, it was still very surreal to actually know that we were).  I fully expected one of those "moments" with my husband where I look at him and he looks at me and amazement, love and wonder fill our expressions.  However, my husband's eyes were still glued to the screen - and, instead of wonder and amazement, I saw something more like scepticism and incredulity on his face.  That's when he said to the doctor: "How do you know?"

The doctor smiled and said, very simply, while pointing at the screen: "Because here's one and here's one."
﻿
﻿ What a day - what an experience!  28 weeks later I delivered two healthy, beautiful baby boys.  They each weighed almost 7 pounds and were three weeks early.  I think the pregnancy experience is wonderful.  It is such an indescribable feeling having a child grow inside you - but to have two at the same time is beyond words.  I grew fairly large, but I still had people telling me I didn't look big enough to be carrying twins.  I topped the scales, but still only gained about 40 pounds.  It really was a great pregnancy...  - Okay, towards the end I was absolutely miserable - and at one point Dave found me crying like a baby at about 3:30 in the morning after I had tried unsuccessfully to fall asleep in every possible position on every possible piece of furniture in our house - and I could barely stand because of the pain between my legs because Baby A was so low and I could barely sit because of the back & rib pain baby B's head was jammed up into my ribcage, but, I knew it could be worse!  Two babies for the price of one pregnancy isn't a bad deal.  Like I said - I think the pregnancy experience is wonderful...
﻿
﻿

﻿﻿Over the past 19 months, since the boys were born, I wish I could tell you how many times I have heard the same expressions and questions: "Wow! You have your hands full!"  and "What is it like having twins?"  and "How are you doing?"  and "Are they good babies?"  and "Are you getting any sleep?"  I love when people ask me these things and comment on my babies - because I really am proud of them and proud of what Dave and I have accomplished these past two years - but I have to say my favorite comment came from a friend of ours who also has four children (but no twins).  When we saw him for the first time after the twins were born he opened his mouth and I expected one of the previous statements to come out.  Instead he said: "Is taking care of twins pretty much what I imagine it's like?"  Yes!  If you've had a baby, you can get a general idea of what it's like to take care of two at the same time, however, you can't really know - I mean, really know - until you've lived through it.  Because as much as I tried to prepare myself before they were born, I really didn't know. 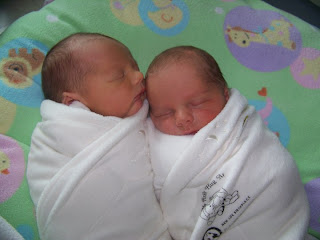 My second favorite comment came while I was in Wal Mart one day when the boys were about 6 months old.  I had both babies in their infant seats.  One was in the front facing me and the other was sideways in the back of the cart.  A middle aged gentleman came up to me and looked at the baby in the front and said: "Wow!  Isn't it amazing!  My son has a little boy about that age and, boy, is he a handful.  It's so much work having a baby, isn't it?"  I nodded and smiled, then he moved on and for the first time noticed the second baby in the back of the cart and his eyes grew huge and he said: "Holy S--t!  You have TWO of them!"  Yes, sir, I do.  :) 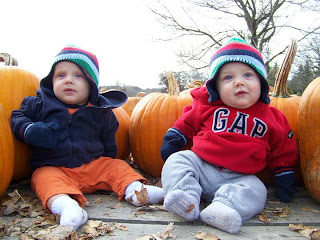 Diaper changes, clothing changes, bath time, feedings (I nursed them until they were 10 months old), lulling to sleep - all of it you do for one baby, then turn around and do it for the next.  You get one baby to sleep and the other wakes up.  For the first 9 months it was almost a constant go, go, go.  We just did it.  People have asked me how we did it and I just tell them, we don't have a choice, we just do what we need to do and try not to think about it too much.  My best advice to parents of multiples is to take things one day at a time - because whenever I lost that perspective I became so overwhelmed I didn't want to face the next day.  Thankfully - THANKFULLY - we've moved past that stage.  Now we are in the fun stage.  The one where we get to know these two little people and caring for them is so much easier.  We are down to 8 diaper changes a day (if we're lucky), instead of 12-16.  Sleeping 11-12 hours through the night (hallelujah!), less crying (more words!) and walking on their own.  It is still a lot of work, but it is so much more manageable, and getting sleep at night makes all the difference in the world. 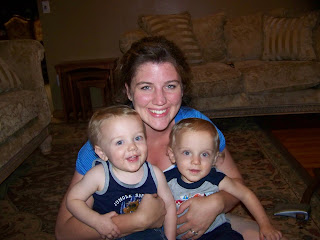 When everything is said and done, I wouldn't change having twins for anything!  My boys are so unique and so special, but even more so because I couldn't imagine one of them without the other.  I know that God never gives us more than we can handle and if He gave us twins than He also gave us everything we need to raise them - and to do it well.  Our girls have been great little helpers along the way and we've had so much love and support from our family and friends - it wouldn't be possible without all of the people in our lives.

There are times - many of them - that Dave and I still look at those two little monkeys and are so shocked  that we have twins.  One of us will say out of the blue to the other: "Hey - we have twins!  How did this happen?"  And the other one will say: "I know - isn't it crazy!"
﻿﻿﻿﻿﻿﻿ 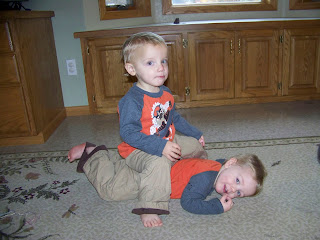 Posted by Gabrielle Meyer at 11:49 PM

Email ThisBlogThis!Share to TwitterShare to FacebookShare to Pinterest
Labels: Our Little House on the Big River