My Characters Have Come to Life! 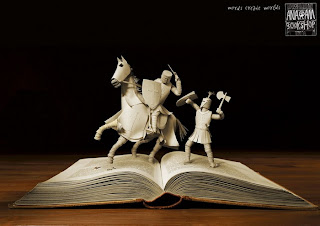 I recently finished the first draft of my novel, but I felt like I didn't even know my main characters!  They really hadn't come alive for me.  How was that possible since I just wrote over a 122,000 words specifically about them?!?!  So I found some books and started to study the craft of creating fictional characters...
I am reading "The Art of War for Writers" by James Scott Bell and one of the things he recommends is to start up dialogues with your main characters and let them tell you who they are.  He said its fun and a bit spooky at times - and I found out he was right!


I started to let my main female character, Elizabeth, tell me about herself.  I started by writing in the first person and said: My name is Elizabeth Chatfield, but my family and friends call me Ellie..." and from there she said 4,139 words about herself.  It was amazing.  I had a general idea of who she was and what her back story looked like, written up on a fill-in-the-blank form, but her spirit didn't come alive to me until she told me about herself, in her own voice.
It does seem kind of like a creepy idea, doesn't it?  But it is so much fun to be creative in this way - to let your character "come alive" in their own voice.
I did the same thing with one of my male characters and his turned out to be just over 4,200 words long.  I am in the process of letting my second male character "talk" to me, and I have been simply amazed at how quickly my fingers fly across the keys.  Each 4,000+ word biography has been done in a little over two hours - that is incredible to me.
All three characters have such different back stories and such different "voices," and I have been so encouraged to finally know who they are.  As I go back though and re-write my story, I already know a lot has to change, now that I have a better handle on how they see the world, how they were raised, what their dreams are and how they struggle.  It has brought wind to my sails!  My characters have come to life!
Posted by Gabrielle Meyer at 3:34 PM