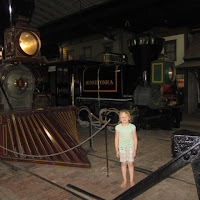 I thought I'd end the week by sharing some photos from a recent visit we took to the Lake Superior Railroad Museum in Duluth, Minnesota. We stumbled across the museum four years ago and it was a complete delight! I couldn't wait to get back. The Museum is housed in the historic Union Train Depot, which is a French Chateauesque building built in 1892. In 1910, seven railroads dispatched over 50 trains a day from there. 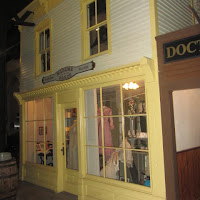 The depot served as a small Ellis Island to the immigrants who would arrive and wait for their connection. During times of war the soldiers would march down Superior Street and board the trains there. The last train left in 1969 and four years later the building was restored and turned into a museum. 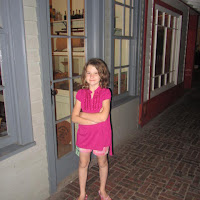 Along with the historic trains, the museum houses Depot Square, which is a 3/4 scale recreation of Duluth's downtown in 1910. You can peek in the windows and see what a store or office looked like in that era. There is a doctor's office, a drug store, a millinery, a general store and many more. There is also a working soda fountain, where you can buy a treat. 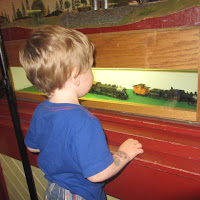 One of our favorite exhibits is a model train and town that is easily 20x30 feet and enclosed in glass. I was impressed with the attention to details in the little city. We chased that train around and around. 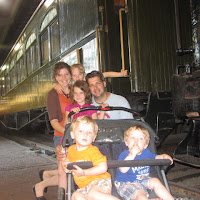 My youngest son LOVES trains. We live close to the train tracks and whenever he hears one he shouts: "Mama, choo-choo! Mama, choo-choo!" When we get stopped by the train he says it again, but then he starts yelling: "Mama, choo-choo, bye, bye? Choo-choo, bye, bye?" And he cries and cries because it's leaving. My girls giggle when he does this, and I have to confess, it makes me smile, too. Naturally we thought he'd love the train museum more than any of us, so when we walked into the gigantic structure and saw over a dozen trains dating from the 1860's, we all watched his reaction closely.﻿

The first one we came to had replicated train noises and the wheels chugged. His eyes became huge and I could feel his heart pumping beneath my hand. He started crying: "Choo-choo, bye, bye?!?!" I'm afraid he thought it was going to start moving and we'd all be run over. He didn't want to get out of his stroller for the remainder of the visit. I was able to persuade him to go on a caboose, but it didn't last long and he wanted off. He prefered to enjoy the trains from a distance.
﻿ ﻿ ﻿﻿﻿
﻿The rest of us loved exploring the dining car, snow plow train and an assortment of others. It was fun imagining what it would have been like to travel by train a hundred and fifty years ago and I was filled with ideas for a book!

Hopefully someday we'll be able to go back when our youngest understands the trains aren't leaving the station.

﻿﻿﻿﻿What about you? Do you have any trips or visits planned this summer? What are some of your favorite museums or historic sites?

Posted by Gabrielle Meyer at 10:39 PM