On Wednesday I shared pictures of two items that would have been common to people in their day, but now they appear very unusual to our 21st Century eyes.
﻿ 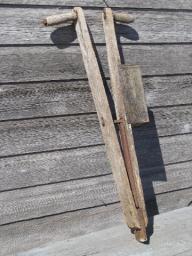 The first is a hand-held corn planter. The seed corn would go in the little box on the right and when the farmer placed the pointed end into the ground and pushed the handles together, a seed would drop out of the box. This handy tool allowed the average farmer to plant four acres of corn a day. In 1902 the Sears, Roebuck & Co. advertised an Acme corn planter for 56 cents. 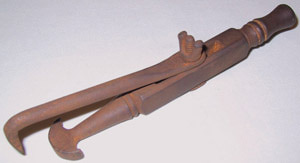 This item is not for the faint of heart! It's called a Dental Pelican and was widely used by dentists to extract teeth before 1742 when the dental key came into use.

This is the dental key. It was widely used (with some modifications) until the end of the 19th Century when the more modern forceps were introduced.