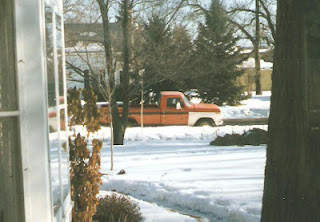 I will never forget the day my dad proudly drove the Pumpkin Beast into our yard. I watched in astonishment as my older brothers jumped into the cab of the offensive vehicle, excited that this was their new ride. My mom was happy because everyone in town would keep tabs on her boys in a bright orange truck.

Although the boys had done their best to demolish the Pumpkin Beast, my dad had done his best to fix it up, thus the truck became my own "ride" at the age of sixteen, only now it was worse off than before. At one time its only flaw was that it was pumpkin orange, now it had scratches, dents, missing pieces and a bad paint job.

I was convinced that I would be ridiculed and mocked by my peers, but what happened actually surprised me. The Pumpkin Beast was a hit. No matter where I went, everyone knew I was there. Driving "Gabe's Pumpkin Beast" because the "sweet" thing to do.

Over the years I drove it, the truck became very dear to me so naturally I had to spruce it up a little. I laugh now to think of my dad driving that truck to work with the glow in the dark stars plastered to the ceiling and the little stuffed money hanging from the rear view mirror, or the key chain that hung down to his knees with the thirty odd trinkets I'd collected from my friends. He never complained; I think he was secretly relieved that the child driving the truck was not trashing it.

There were a few mishaps along the way. One time my cousins hopped into the passenger side and put his foot through the rusted out floor. Another time I was driving down the road and the rusted muffler flew off the back - the truck didn't sound any different with it gone, so we didn't replace it.

My favorite story, though, has to be the case of the missing knob. This happened years after the abuse from my brothers, so I'm still not sure why my dad made such a big deal about it. Somehow the knob for the heater went missing one night. My dad questioned me right away the next morning, but I didn't know where it had gone. He drove me to my friend's house, where I'd been the night before, and he had me lean out the passenger side door to look for the knob while he drove five miles an hour down the main road in town. We never found the knob.

The Pumpkin Beast finally left our family quite suddenly (before my younger sister had the privilege to drive it). After seven years of my dad pouring money and time into repairing the truck, a fifty cent clip broke. He'd had enough. He wouldn't put another penny into it. That day he sold it to a coworker for fifty dollars and the Pumpkin Beast was no more.

What about you? What was the first vehicle you drove? Any fun stories to tell?
Posted by Gabrielle Meyer at 12:33 AM